The Gathering
Celebrating 10 years of showcasing, convening and support
for equity and pluralism in the Arts 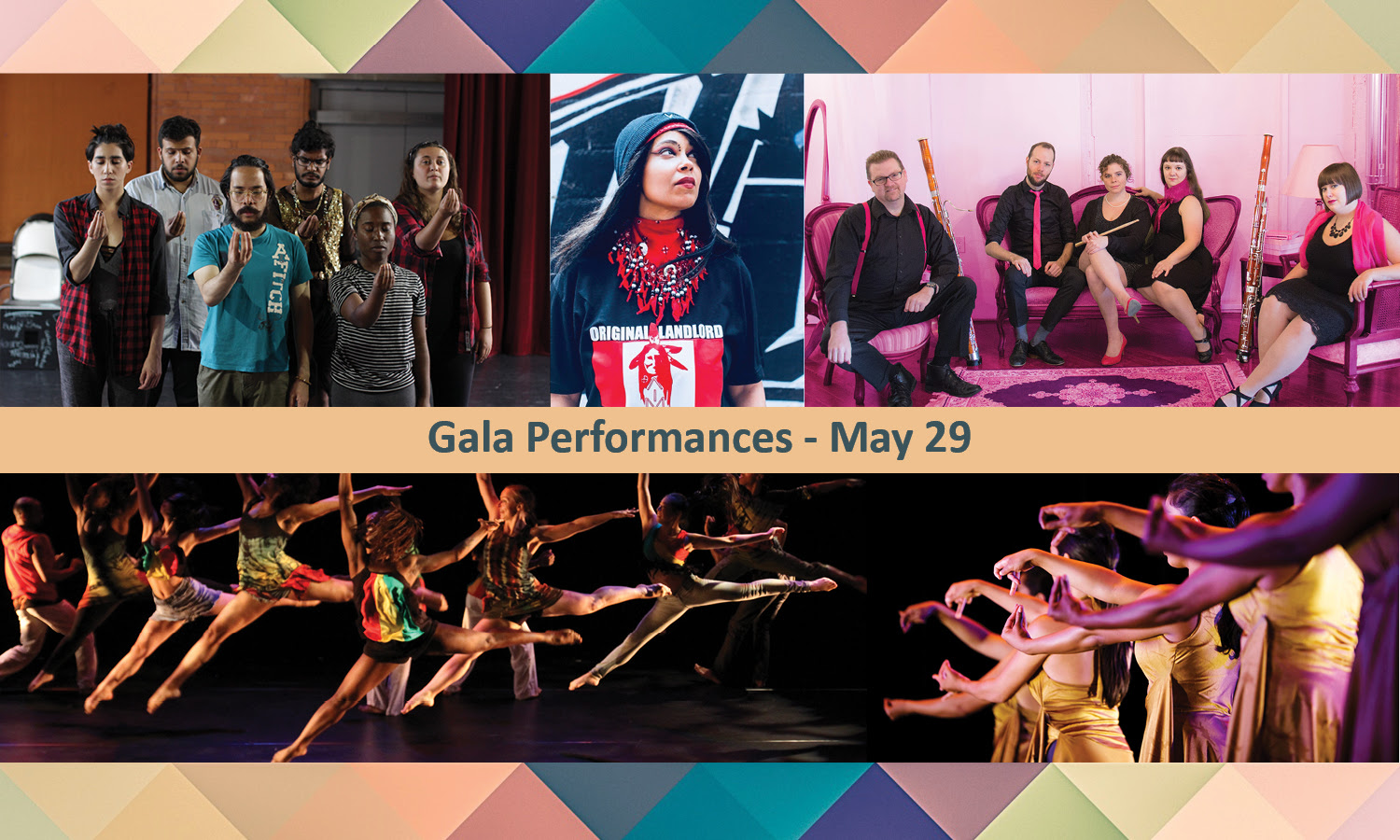 The evening will include:

Charting displacement through the intertwined narratives of 6 young immigrants – Territorial Tales explores the voice of youth, the true nature of home and our collective relationship to the place where we reside.

Workman Arts’ Bruised Years Choir adds magic to any event! Composed of members who identify as having mental health or addiction experience, their repertoire of contemporary songs is a wonderful way to entertain guests AND make a meaningful social impact.

Established in 2016, the Bruised Years Choir is led by Dora Award-winning artist Jim LeFrancois and musician Rob Joy and performs an assortment of contemporary selections, accompanied by piano and guitar. The Bruised Years Choir has performed at events such as the Invictus Games, the 5th Annual Patrick Conner Awards (Theatre Centre), CAMH’s Phase Three Ground-Breaking Ceremony, the Luminato Festival and the Rendezvous with Madness Festival.

Sampradaya Dance Creations is an award-winning dance company that has shifted the paradigm for South Asian dance in Canada. Under the visionary leadership of its Artistic Director, Lata Pada, SDC has redefined the classical movement discipline of bharatanatyam to be a contemporary expression responding to current realities and relevance. SDC creates dance that is bold and thought provoking while being compelling and engaging.  The company has successfully created unique inter-cultural and multi-disciplinary dance works that challenge how South Asian dance is perceived.

Today, it is also recognized as a vital sector builder advocating for, nurturing and supporting the culturally diverse dance ecology in Canada. Ranging from personal autobiographical narratives to the immigrant experience, from historical to political, from sport to popular culture, the Company’s work spans a diverse range of solo and ensemble work. Celebrating 30 years, SDC has positioned itself at the forefront of South Asian dance in Canada, creating new benchmarks of artistic excellence.

Kindred – Inspired by women who share a journey of individual and collective challenges and navigating a world of social pressures, Kindred re-imagines and contemporizes the bharatanatyam aesthetic to speak of female connections and bonds. Choreography: Suma Nair.

Mahlikah Awe:ri Enml’ga’t Saqama’sgw (The Woman Who Stands and Walks In The Light),  a TD Arts Diversity and KM Hunter Award finalist, is a Haudenosaunee Kanien’kehà and Mi’kmaw; Drum Talk Poetic Rapologist; slam poet, musician, hip-hop emcee, recording artist, arts educator, keynote speaker, artist mentor, festival curator, theatre artist, and emerging knowledge keeper and medicine carrier. She is the Director of Programming for Neighbourhood Impact for the Centre for Learning & Development in Regent Park and founding member of Red Slam an Indigenous Art 4 Social Change Movement. Published in 9 literary publications and two music recordings. In 2018 she opened for Alma Clooney at the Luminato Festival, and was a featured performer for the inaugural Nuit Blanche in Scarborough, at the Scarborough Civic Centre. In 2019 she joined the cast of The Daughters Of Lilith, while featuring at Aga Khan Museum, The Fiddlehead Festival, The London Poetry Slam Finals and the FOLD Literary Festival in Brampton. Awe:ri is an Unapologetic Cultural Arts Leader engaged in social change movements across Turtle Island, with a focus on access & equity for BIPOC & LGBTQ2S humans.

DFM is the world’s first and only electric bassoon band. This genre-bending ensemble reimagines your favourite tunes from the 70s, 80s, 90s and beyond…on electric bassoons.

Since 2011 DFM has been smashing the bassoon’s boundaries through acoustic and electronic sound modifications, creating new and unique sounds with familiar melodies. DFM cannot be contained by your typical symphony orchestra, and has performed for thousands at Yonge-Dundas Square, appeared at the Northern Lights Festival Boréal, and played to standing-room only crowds at pubs, cabarets and fundraiser events in the Greater Toronto Area.

With three bassoons sharing the vocal and lead guitar lines, contrabassoon laying down the bass line and a drummer keeping time, this atypical cover band is an unforgettable listening experience.

KasheDance. In its 10th Anniversary and hailed as embodying artistic diversity in technique, form and choreography, KasheDance echoes in a new genealogy of Afro contemporary dance grounded in three main processes – Creation, Research, Presentation supported by Outreach initiatives in community and in education. We engage and creates within a three-pronged CRP model where Creative / Research / Presentation model, is supported by further deepening with the Critical Response Process pioneered by Liz Lerman / Dance Exchange and grounded in collaboration, representation and partnerships.  KasheDance finds inspiration from visual arts, music, mixed media and spoken word and is creatively and socially curious about how dance can fuel focused and progressive conversations around our practice while situating people and audiences in cross-cultural engagement. The company has performed for dance Immersion, at the Canada Dance Festival, Dancing on the Edge Festival,  Moving Inspirations Dance Festival (Winnipeg), and at the Lt. Governor of Ontario Suite in a collaboration between the Office of Lt. Governor for International Dance Day 2014 among other venues. KasheDance’s last production FACING Home: Love and Redemption was voted Top 10 performance in Madison, Wisconsin, was in collaboration with the University of Wisconsin Madison Dance Department and has toured to seven cities in US, Canada and the Caribbean. This June, the work will be the main performance event of the US Virgin Islands St, Croix Pride 2019.