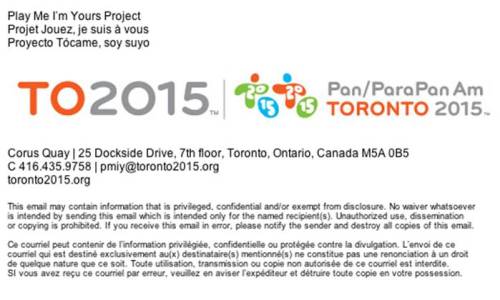 Here is another request for outreach on another project on behalf of the  Arts and Culture program of the Toronto 2015 Pan/Parapan American Games in case you know anyone or any organizations that might be able to help.  Feel free to pass along.

On July 10th, 2012 TO2015, the Organizing Committee for the Toronto 2015 Pan and Parapan American Games, will recognize the three year countdown to the 2015 Games in Toronto. Promoting this milestone, TO2015 is planning an event titled “Play Me I’m Yours”. This event will consist of 41 piano’s which will be designed by artists from each of the 41 Pan American countries. Following this event the pianos will be distributed to locations around downtown Toronto where they will remain on display for public interaction until the end of July.

Play Me, I’m Yours has been showcased internationally since 2008, over 400 pianos have been installed in cities across the world, located in parks, squares, train stations, markets and even on bridges and ferries. The pianos are for any member of the public to enjoy and claim ownership of. Play Me, I’m Yours has now reached over a million people, including 600,000 in New York, 300,000 in London and 200,000 in Sydney.  The Pianos are typically designed by visual artists. By creating a place of exchange Play Me, I’m Yours invites the public to engage with, activate and take ownership of their urban environment. You can learn more about this international phenomenon at http://www.streetpianos.com/

We have a number of artists confirmed but there are still some countries that we are looking for local representation on.

Please email pmiy@toronto2015.org for more information or with suggestions.