Mateo Galindo Torres is a Colombian born multidisciplinary dance artist based in Toronto. In his early teens, he discovered dance at a local studio in Bogota, training in various dance forms. From 2006 to 2010 Mateo traveled to Cuba to focus his training on classical ballet, and in 2010 traveled to Canada where he deepened his studies in contemporary and modern dance.  He has performed professionally in Canada, Colombia, Cuba, Germany, Mexico, and Panama. Last year, he has had the fortune to work with Debra Brown, Sashar Zarif, Enana Dance Theatre, Wind in the Leaves Collective, High Society Cabaret, Kaeja d’dance, Danny Grossman, Larchaud Dance Project, Aria Evans, Sogand, KasheDance, and Leica Hardy. As a choreographer, Mateo has created and presented his work in different Canadian cities. Mateo is the founder and artistic director of GUETCHA GUARITCHA. Mateo’s work is often politically charged, inspired by social subject matters, and fuses his eclectic movement background.

Sashar Zarif is a multi-disciplinary artist, educator and researcher whose practice invites a convergence of creative and cultural perspectives, steeped in traditional, ritualistic, and contemporary dance and music of Western/Central Asia. He has toured in over 36 countries promoting cultural dialogue through fieldwork, residencies, performances, and creative collaborations.

Zarif holds a Master of Dance Degree from York University, where he also directed courses in dance and performance studies from 2004 to 2012.

He has been awarded the title of Master of Dance, as an honorary faculty member of Uzbekistan State Institute of Choreography. In 2012, Zarif received the Queen Elizabeth II Diamond Jubilee Medal.

Ahmad Meree (Actor & Playwright)
Ahmad Meree is an actor and playwright, born in Aleppo, Syria, a graduate from the
Higher Institute of Theatre Arts in Cairo. He has performed in Syria winning the Best
Actor Award in the Central Theatre Festival in Syria (2008). In Egypt, he directed
Ionesco’s The Lesson and won Best Director Award for directing Chekhov’s The Bear at
Cairo’s Festival of International Theatre (2013). Ahmad continued his journey as a
refugee when he moved to Canada in 2016. He now lives in Kitchener, ON, where he
works with MT Space as artistic associate, facilitator and co-director of their Young
Company. Ahmad has written three plays, Suitcase (2019), Adrenaline (2017) which he
toured to the Ryga Festival in Summerland, BC and Summerworks Performance
Festival in Toronto; and Underground (2014) (Best Original Script in the University
competition). Ahmad is the current Artist-in-Residence at The Registry Theatre in
Kitchener.

Majdi Bou-Matar (Director)
Majdi Bou-Matar is a theatre maker who immigrated to Canada from Lebanon in 2003. He holds an MA degree in Drama from the University of Guelph with research focus on
Canadian intercultural theatre. Majdi is the founder of MT Space, a professional theatre
company dedicated to cultural diversity. His most recent directing credits include T he Last 15 seconds, Body 13, Paradise, The Raft, Adrenaline , and Amal . His work tours nationally and internationally. Majdi is also the Artistic Director of IMPACT, a biennial international theatre festival in the Waterloo Region of Ontario, Canada. Majdi was recognized as the Presenter of the Year 2017 by the Canadian Arts Presenting Association (CAPACOA). 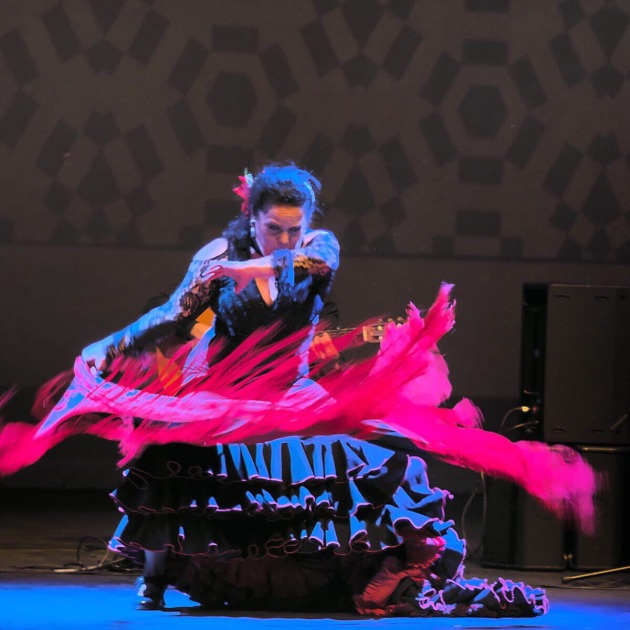 Compañía Carmen Romero is Canada’s most provocative flamenco collective. In their twenty-six years-plus in operation they have developed a rich and original aesthetic that employs flamenco as a language of expression and not as a cultural art form to solely preserve the traditional and historical origins. They invite curiosity, challenge and risk into the process as the genesis to their creations. Compañía Carmen Romero is described as a company that “conveys old traditions to the modern world articulating the primal essence of flamenco.” June Heywood, Caravan World Rhythms. Compañía Carmen Romero breaks the glass ceiling and lets flamenco tell the story, express the idea and open the creative door for all to enter and explore.

Compañía Carmen Romero is based out of Toronto, Canada. Originally founded in 1986 by Carmen Romero as artistic director to Candela Flamenca. Carmen Romero is of Spanish heritage and immigrated to Canada in 1971. It is remarkable that she has developed a collective of Canadian dancers and musicians that perform in prestigious events and stages in Europe the United States and Asia.  “The exclusive focus and depth of Romero’s commitment to the art of flamenco is not just understandable given her family heritage, but somehow fitting and more authentic.  She truly belongs to the history of flamenco in a way not easily achieved.” Dance International

The collective also creates smaller works such as Luna Llena (Full Moon) that competed in the 9th annual Certamen de Coreografía de Danza Española y Flamenco (2000) at the prestigious Teatro Albeniz in Madrid, Spain. As well as May I join you? In 2014 at the International Festival de Castanuelas in Girona, Spain. UNO DOS y TRES toured with Dusk Dances in 2018. Compañía Carmen Romero has also created choreography and music for films such as: El Cambio by Dan Eisen,  Sombra by Bravo Fact, CARMEN by Paola Marino Films and Flamenco by Gloria Kim.

Compañía, Carmen Romero is very grateful for the creative financial support from the Canada Council for the arts, The Ontario Arts Council, the Toronto Arts council as well as public funding initiatives and private supporters.

2010 Carmen Romero coached latin pop star Shakira for her song Gitana featured during her world tour “Sale el Sol.” Whether it be for recreation or profession, Carmen Romero invests her energy in finding people’s strengths and gives them the tools to train their mind and body. Compañía Carmen Romero’s moto “Discover your passion!  Invites you to explore through the power and artistry of flamenco.