Newton Moraes was born in Porto Alegre – Brazil. At an early age he started dancing Samba, playing soccer and then pursued studies of Physical Education at the Unisinos University in Porto Alegre. Later he studied Afro-Brazilian Dance, Jazz and street dancing. In 1991 he decided to move to Toronto with his late partner Robert Shirley Professor of Anthropology at University of Toronto and he studied Modern and Contemporary Dance at the Professional Programme at the School of Toronto Dance Theatre and became a alumni student. His dance company Newton Moraes Dance Theatre performed to public and critical acclaim in Canada, Germany, Brazil, Colombia and Cuba. NMDT received support from Foreign Affairs Canada, Canadian Embassy, Toronto Arts Council, Ontario Arts Council and Canada Council for the Arts, Laidlaw Foundation, Goethe Institute in Toronto.

Check out our interview with Newton Moraes

The Seat Next to the King

In September of 1964, a chance meeting between two men reveals the bond they share and the ties connecting them to America’s most powerful leaders in playwright Steven Jackson’s stirring The Seat Next to the King.

Behind the door of a public washroom in Washington, D.C., two lives linked to the country’s most influential figures collide when a white man seeking a sexual encounter meets a black male stranger. Winner of the 2017 Toronto Fringe New Play contest, a festival Patrons’ Pick and a sold out run, this affecting work of historical fiction returns to tackle race, sex, identity, and the cost of reconciling each for two disparate human beings with a shared innate need. 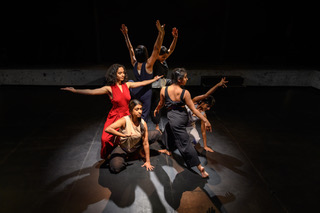 Led by Founding Artistic Director Nova Bhattacharya, Nova Dance is a radically imaginative, contemporary dance company dedicated to reflecting the evolution of Indian classical dance on the Canadian scene. Over the past decade, the company has presented critically acclaimed works, arts events for all ages, and created a context for South Asian dance artists to take space with their art as an integrated part of Canadian cultural expression.

Check out the interview and performance by Alluvial Plain